The 7th Principle of Modern Testing

Huib Schoots recently Tweeted from RTC - Romanian Testing Conference, about a talk by Conor Fitzgerald, where he spoke about the Modern Testing Principles. 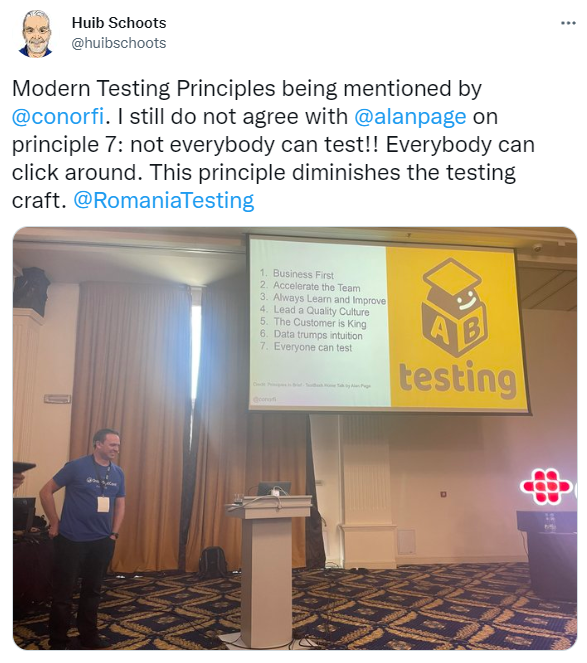 From his Tweet, I see that Huib doesn’t agree with Principle 7. As you might be able to see from the slide, Conor has abbreviated the principles, so let’s remind ourselves of Principle 7 in full:

“7. We expand testing abilities and knowhow across the team; understanding that this may reduce (or eliminate) the need for a dedicated testing specialist.” - AB Testing

This is the 7th of the 7 Modern Testing Principles, as created by AB Testing. If you’re interested, go read the full list, it’s short and consumable and you can better make up your own opinions. See: https://www.moderntesting.org/.

Full disclosure, I was not at the conference and I didn’t get to watch Conor’s presentation. So my reactions are based on the Tweet, and the original principles.

My take on Principle 7

I have my own opinions on this, from my own experience, context and opinions. And I shared these in the thread. Here is my response:

1. Testing software, the activity is a combination of theory that can be taught, and practice that can be done.

2. Those skills take time, effort and mental capacity to get good at. It’s an investment not everyone is willing to, or has capacity to do.

3. Though ensemble testing, and other collaborative ways of working, anyone involved in using of creating software can usefully and meaningfully contribute to the testing effort. In doing so, they may pick up some theory and skills in testing.

4. Having a person who is able to focus on the role of Testing, had a good opportunity to learn and practice the craft of testing in a deeper way, faster, then someone who splits their capacity between Testing and other activities. Testers can be efficient force multipliers

5. Having experience in other part of product development can give a dedicated Tester skills that are advantageous to their Testing work. Be this product management, software development, design, operations, security, infrastructure, support or other roles.

6. By working collaboratively, we can get some of the advantages of knowing testing deeply, software development and other roles deeply and combine them, without one person needing to already know all these things. Accelerating access to the benefit of this wide knowledge.

I clearly wasn’t as far away from the original intention of Principle 7 as I thought I might have been. Not least because Alan Page appears to agree with me, in this Tweet: 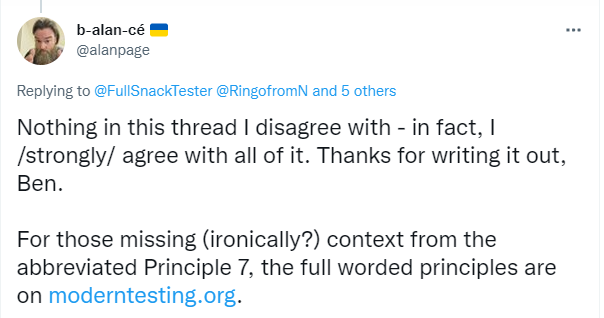 Reading some other responses to the thread, there is clearly a bunch of different opinions around if Developers can test, where there was some commonality and agreement it was that: